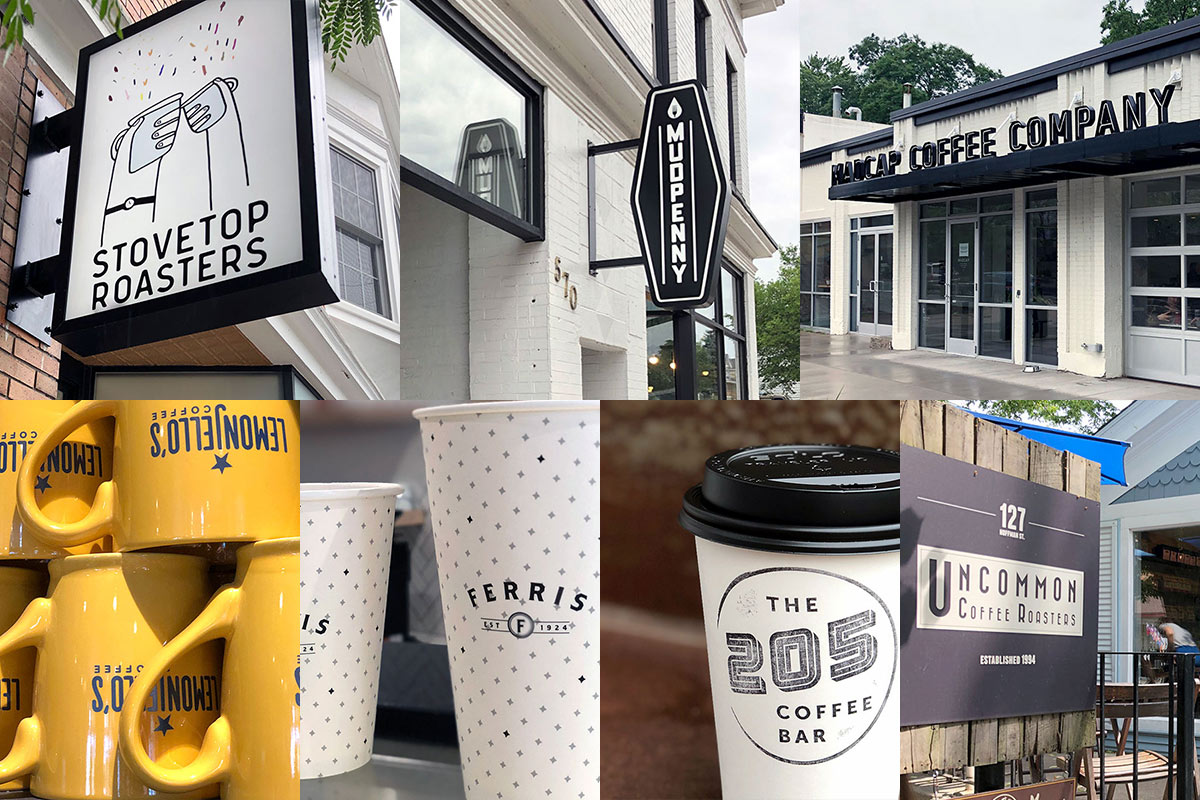 When planning a vacation, I always try to find as many local coffee shops to go to while there. My wife and I both love coffee and our three kids have learned to love exploring them with us as well. We recently returned from a trip to Holland, Michigan and got to explore a lot of coffee shops and roasters in the area. Below I share some of my thoughts and some photos about each spot. They are listed in the order we visited them.

MudPenny wasn’t even on my list initially, but after asking for ideas on Instagram and having two different people recommend it, I knew I wanted to give it a try. It was a really nice renovated building in an industrial area of the city; there were a lot of cool shops around it mixed with industrial buildings. They had a really cool design style with Abraham Lincoln splashed throughout their menu, wall art and more.

They roast their own coffee on a type of air roaster I had never seen before (see image below). The only coffee they offered though was espresso-style drips or batch brew. My wife and I each had a latte (one iced, one hot) that we thought were both very good. They also have a great full menu, but we had just eaten breakfast, so we only ordered a cinnamon roll and waffle—both of which were excellent.

Stovetop Roasters is based in Ann Arbor, Michigan, but has a location in Grand Rapids on Fulton Street. I had a roastery tour planned with Madcap mid-day, so we stopped by Stovetop beforehand. They have a signature, quirky style that I love with hand-drawn illustrations on every bag. Given the quirky style of the bags, I expected a bit more personality and quirkiness to the shop. It was very clean and minimal though and fit what has become a more ubiquitous coffee shop style. That said, it was still a beautiful shop and I loved how they displayed various illustrations (similar in style to the bag) throughout the store. While there, I had a cup of their Ethiopia Nano Genji as a v60 pour over and also purchased a bag of their Peru Valle Pauran. The Ethiopian was good and had some nice, subtle berry notes that got better as the coffee cooled.

My favorite shop of the trip was Madcap. I had the awesome opportunity to get a roastery tour with the roaster manager. Madcap has four locations in Grand Rapids and I visited the one on Fulton Street that also is paired with their roastery and training lab.

Before starting the tour, I had Gore Kone nitro cold brew, which may have been the best nitro coffee I’ve ever had. It was smooth, creamy and still had the personality and complexity you’d find in a pour over coffee. They explained they make their nitro with a method more similar to Japanese iced coffee vs. traditional cold brew, which helps preserve some of the complexity and aromatics.

On the tour I tried their Luis Reinoso Colombian coffee, which is a farm they have been working with for almost 10 years. As with many Colombian coffees I’ve tried recently, it was delicious and had a lot of personality.

The cafe was really cool too and the exterior reminded me of the Watson location of Blueprint Coffee in St. Louis. Their menu was very interesting as well and if I wasn’t heading into a tour, I would have done their “Tap Flight,” which features their two nitro cold brews, a nitro cascara tea and one more specialty tea on nitro.

205 Coffee Bar is a relatively new coffee shop located in downtown Holland. They serve Stovetop Coffee as drip, but also have rotating coffee options for pour over. When I was there, they had Tumbabiro, Ecuador from the Los Angeles roaster, GGET, as their pour over option. It was a full-bodied coffee with notes of pomegranate and packed a wonderful punch. My wife tried the Vietnamese iced latte, which was also delicious. The baristas clearly knew their stuff and did the pour over properly and even measured out the espresso to get the perfect ratios. The shop was packed and had a great environment. They also have a cool garage door they can open in the front, which would give the shop an open air feel, which would be really nice.

Ferris actually started with roasting nuts and only recently entered the coffee roasting business. We tried to get to Ferris’ main location, but didn’t have a chance the day we were in Grand Rapids. They have a new location in Holland that opened a year or so ago that we checked out instead though. The space was beautiful with a really cool art gallery connected to it. I tried an iced pour over of their current Burundi, which they made via the Japanese iced cold brew method—my favorite. My wife had a caramel iced latte, which we both agreed was the best of the trip. The barista was super knowledgeable about the coffees and were all very friendly. We enjoyed this shop so much we came back a second time before leaving to try some of their other coffee offerings. I tried their Kenya Thirikwa, which was bright and everything a good Kenyan coffee should be.

I had stopped by Uncommon Grounds last year and have actually featured their bourbon-barrel aged coffee on Pull & Pour previously. They have a cool space in downtown Saugatuck that we stopped in while walking around the city. I tried their current nitro bourbon-barrel aged coffee (Virtue Cider Bourbon), which was delicious and refreshing on a hot summer day. I also picked up a carton of their Cultivo cold brew, which I plan to review soon.

The last coffee shop we stopped in was Lemonjello. It is a coffee shop in Holland that serves Madcap coffee. I had a pour over of Party, a washed Ethiopian coffee I had been wanting to try for a while. My wife had her usual iced caramel latte. We were impressed with both and really enjoyed the fresh blueberry muffin we shared as well. Their space is really homey and very different from the other two Holland coffee shops we went to (Ferris & 205 Coffee Bar). They have local artwork hanging on the walls and a really nice patio area for seating.